Susan Morphew was born on June 6, 1944. Any history buff will recognize that date for its importance to our world. Incidentally, while Susan was getting her first look at Mason City, Iowa, her father was a sailor in the U.S.Navy! After graduating from North Iowa Area Community College (N.I.A.C.C.) in Mason City, Susan went on to become a graduate of Buena Vista University in Storm Lake, Iowa. Upon graduation in 1970, she taught fourth grade in the Ida Grove, Iowa, Community Schools for one year. 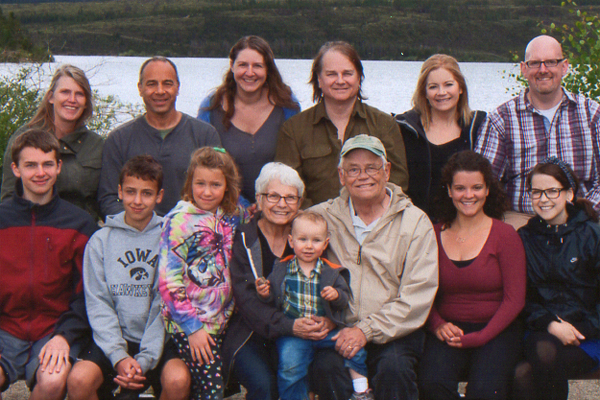 Larry Morphew was born on July 18, 1942, in Nora Springs, Iowa. Larry, like Susan, attended N.I.A.C.C. and Buena Vista. As a matter of fact, Susan and Larry attended college together as a married couple with children. While a student at Buena Vista, Larry served for three years as pastor of the United Methodist Church in Nemaha, Iowa. Later, while teaching in Estherville, he served for four years as Pastor of the United Presbyterian Church in Armstrong, Iowa. Larry is an ordained minister and received the bulk of his theological training through the General Board of Ministry of the United Methodist Church - Nashville.

Melinda (Mindy) Johnson, their oldest, is also a graduate of Buena Vista and holds a Master's Degree from Regis University in Denver, Colorado and she has also completed her studies in Ed. Administration. She retired as an administrator in the Denver school district shortly after being diagnosed with Leukemia [ Mindy's Caring Bridge Site ]. Mindy is the mother of two of Sue and Larry's granddaughters, Alexandra (Alex - Univ. Masters Degree in Education - Teaches in a bilingual school in Colorado) and Rachael (Univ. Masters Degree in Architecture - an architect at an architectural firm in Colorado). Mindy's husband, Jeff, is also an administrator at a school in Colorado.

Alan (Al), Sue and Larry's second, is a singer/songwriter. He maintains a professional website as a solo artist and songwriter and for his band Alan Morphew and The Hit, where you may download clips from his solo CD - click HERE to access that website. Alan's wife, Sarah, is a professional photographer and you may access her professional website HERE! Because of their work, they spend a lot of time traveling and living on the road. They spend a lot of each year living in Iowa and they maintain a recording studio and photography studio here on the acreage. They spend part of the year on the left and right coasts and points in between performing and doing photography gigs. Al and Sarah both work in the family business designing websites and doing high-end digital graphics.

September 22, 2013 saw the birth of their first child Dylan Gabriel.

Sue and Larry both retired from teaching public school in Estherville, Iowa effective May of 2000. They taught 29 years in the Estherville school district. Sue taught second and third grade, at Maniece, Demoney and Lincoln Elementary Schools and Larry taught fifth and eighth grade science and math at the Estherville Middle School. After retirement in 2000, Sue was an instructor at Iowa Lakes Community College at Laker Alternative High School in Estherville. She retired from that teaching position in May, 2006.

Sue and Larry reside on a 23 acre hobby farm nestled in the woods on the outskirts of Estherville. The oneness with nature which they experience there is an important element of the respite their acreage provides.

In October, 2011 we celebrated our 50th wedding anniversary in Italy. We took a posse with us consisting of Mindy and her husband Jeff and their two adult daughters Alex and Rachael, Chris and his wife Tanya, and Alan and his wife Sarah. One highlight was spending a day in Sue's grandfather's hometown of Gizzeria, Italy and meeting very friendly people there that had heard of Grandpa Tony and admired him very much for moving to the United States as a teenager. We were treated like rock stars in that tiny farming community and got to see the home where Grandpa Tony was raised. Another vivid memory was meeting Teresa Cambria, a cousin of Sue's dad who lives in Barcellona Pozzo De Gotto Sicily. Finally, spending a week in Rome and seeing all of the sites there topped off a grand trip and a special way to celebrate 50 years together as husband and wife. As of this posting, we've been married 56 years.

Clicking HERE will take you to some of our archived family pictures from around 1965 on.